World of Warships is a challenging and amazingly fun naval warfare simulation game. The learning curve can be steep, but once you get the hang of it you’ll be addicted.

Take command of your very own beautifully crafted warship in this thrilling and challenging naval warfare simulation game, World of Warships.

The game boasts many realistically rendered warships, including giant aircraft carriers, powerful battleships, crushing heavy cruisers and highly maneuverable destroyers. As you progress through the game, you are able to unlock new and more devastating warships. But because World of Warships is still in open beta, there are several unavoidable bugs and glitches. For instance, there should be ships from four different countries to play with, but only ships from Japan and the USA are currently available. Some players may be disappointed that the game doesn’t yet feature submarines.

The stats for each type of naval vessel can be categorized in terms of maneuverability, camouflage, survivability (basically its armor) and firepower. Naturally, bigger ships, such as battleships and heavy cruisers, have more armor and hit points compared with smaller ships, such as the destroyers. The bigger ships lack maneuverability and camouflage while the smaller ships can turn and move much faster. The different ships have their own pros and cons and seem to be well-balanced in terms of lethal firepower and maneuverability.

World of Warships provides you with a choice of two game modes to play: PvP or co-op. Start off using the co-op mode and team up with other players online to challenge the AI. There are missions for you to undertake and plenty of exciting team-play. Use co-op as the learning mode before going gung-ho into PvP. 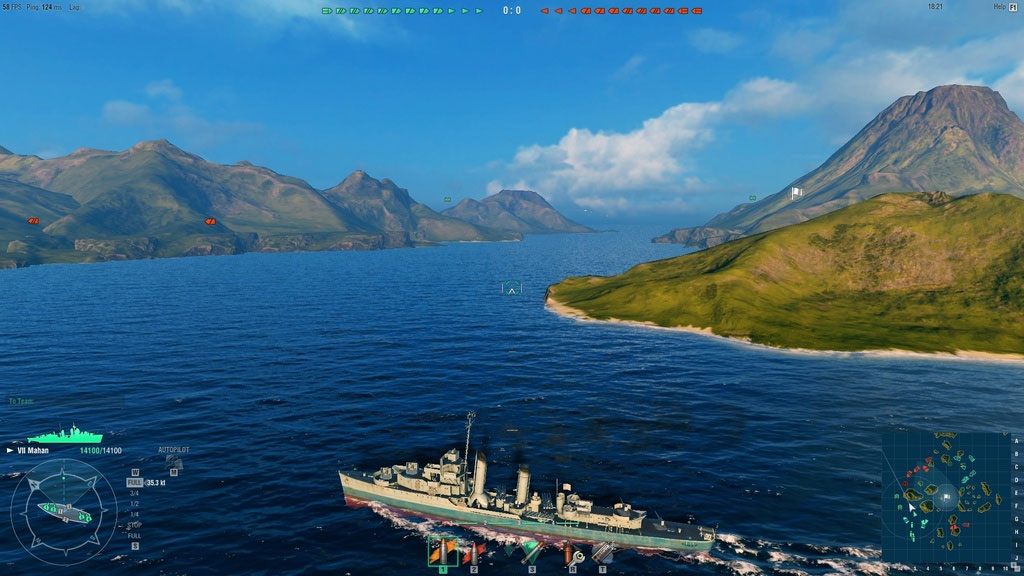 It doesn’t exactly have the most breath-taking graphics but it’s pretty enough.

Constant motion and evasion is the key to survival. So be careful not to ground your ship; it’s not fun to be a sitting duck. Luckily you are given helpful radar-like beeping sounds to warn you if your ship is too close to land. Each ship type has unique abilities; destroyers have a smoke screen that allows them to conceal themselves and retreat from a naval engagement.

Take into account the speed of yourself and your target before you fire and make sure your target is within range. Aim ahead of your target or you won’t be able to get a hit. Generally, each ship is given two different shell types to use. Some ships even have access to deadly torpedoes and you should aim these well ahead of your target because torpedoes move much slower than artillery shells. If you find yourself at the receiving end of a torpedo attack, one technique for evasion is to turn to face the approaching torpedoes head on.

Things that go “boom” – on the open ocean

The damage systems in World of Warships are compartmentalized. Your enemies can destroy all of your weapons but still not sink your ship, rendering your ship practically helpless. If your rudder and steering wheel are damaged in an attack, you lose control of your ship. Ships can also catch fire, but thankfully, you can get your repair crew to smother it. After a battle, your ship will need repairs, and if you have the funds, you can upgrade your ship. By ranking up, you’ll unlock new types of ships at the tech tree.

The commander of your ship is upgradable as well. Higher ranked commanders have improved skills. By using them in battle (deploying them with the ship), they can earn experience points and level up quickly. When your commander levels up, he’ll receive points that allow him to master any of the available skills.

Another brilliant aspect of the game is the graphics. The warships are beautifully and realistically rendered. The sound effects are superb and the background combat music gives a sense of urgency while not being too distracting for you to focus on the battle at hand.

World of Warships is a challenging and amazingly fun naval warfare simulation game. The learning curve can be steep, but once you get the hang of it you’ll be addicted. Players are given plenty of options to customize their warships and their commanders to fit their playing style. At the moment, the game lacks variety in terms of maps and factions. But you should remember that the game is still in open beta and it may take a while for the game to become as fully developed as other war games.

So, what are you waiting for? Command a warship and rule the seas in World of Warships today.